Let's be democratic about this...

Update: I also found this to be in the running: 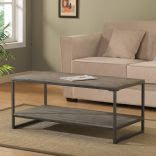 I need a vote friends. I am lucky to have such people around with wonderful taste, because I am having the hardest time ever picking a coffee table.
For reference, this room has two dark brown bookcases on either side of a dark brown table stand, all fairly traditional and pretty plain.
Then there's a dark leather couch, a patterend white, black, and khaki chair, a khaki ottoman and a light gray rug.
I also have two very vintage slightly femme side tables with carerra marble tops (gray/white) - I haven't decided what I'm going to paint the bottoms of those yet, depends on the coffee table somewhat! But that's why I'm thinking a cleaner coffee table is best.
Oh and PS I'd prefer not to spend over $500 or so. And yes I have looked in stores, but haven't been thrilled, and online prices seem to be better.
As you can see by the pics below I'm not set on a style, but would love to know your thoughts!
Posted by KLM at 4:51 PM No comments:

Thought you'd enjoy seeing the fireplace progress (plus another biggie)

This weekend we were able to paint over the previously poorly painted stones - for the record, I would have just left it natural stone if they hadn't painted over it and ruined it already!  I tried sanding paint off but that didn't work unfortunately.
So this was the fireplace. Definetly better than before, but still looked odd to me.  So I impulsively painted part of the mantle, since we had to repaint it white either way. Oops! Looked awful.

BUT I think I found a solution - see the white trim on the right side below? It really made a difference, especially in person, so I think we are going to build (hold the laughs please) a little frame out so the mantle won't look so just plopped on there, which I think is the problem. Stay tuned!

So I don't have pictures ready yet of the NEW floors, but we were prepping all last weekend for our new kitchen, powder room, and den floors to be laid (we thought a professional was best for this, the floors are a bit uneven).
Another (bigger than anticipated) project was the powder room.  Smallest room = biggest grief!  It was wallpapered, so we cockily were like oh we'll just get some goo gone business and strip it down.  But it was barely coming off like that. Torture. So we bought a cheap steamer (I wanted it for cleaning anyway) for like $40 and that seemed to do the trick a little better.

And then the walls were in terrible shape. Awesome.  But sanding helped, as well as some spackling. But basically, it looked like a total crack den in there the night before the floor people came, observe:
After photos coming soon! Sorry to be such a tease, but it looks great :)
Posted by KLM at 11:19 AM No comments:

So all of our outdoor furniture finally arrived! And we have been loving it! Sitting outside for eating and just hanging out has been great!
We cleaned every inch of the room with the shop vac, regular vac, Clorox wipes, etc., and finally put all of our (assembled!) stuff in there. Then accessorized with some pillows, plants (see below) , and citronella candles.  I have more stuff (of course) like lights, a bucket for Lemon's toys, and possibly going to put a crate out there for eating and grilling stuff. Exciting! And definitely better than before
Ok, so I am not a gardener. Not at all. But i have kept these succulents alive for almost a year! They came from the little gardening shop at Reading Terminal in their own little terra cotta pots.  A florist told me that succulents like to be all close together and do well transplanting, so it struck me the other night to do this. Yes, at night. In the dark. But that wasn't my only obstacle...

And that is how Lemon came to find me huddled by the hose, wetting the ground so that I could dig up clumps of dirt with a serving spoon and then carrying this surprisingly heavy and filthy planter back into the sunroom. Mike asked me what I was doing and I yelled "nothing!" while scrambling to cover my mess like a little kid.

I think I need to leave gardening to the professionals... aka just buy already potted plants at Lowe's. And leave them in the pots they come in.
Posted by KLM at 11:04 AM No comments:

I have a billion things to share with all of you - lots going on around the casa and in life, which unfortunately means I'm too busy to update as much as I'd like! But I took these pics a few nights ago so I thought I'd at least share this DIY upgrade.
Note: sorry the past few posts have had incredibly crappy photos, we've had workers in our house so I hid my camera...then forgot where I hid it. But don't worry, I found it while doing laundry (obviously)
There was nothing wrong with our master water closet (I can call it this cause it's just a little room with a toilet and shower. And it makes me feel fancy) per se, but I knew the shower could be better - it's a fairly large stall shower (about 5 ft x 3 ft) and the water pressure is good. Buuut there was shelving, and I am NOT down with my shampoo, etc., on the floor of the shower and neither was Mike.  Also, I've always wanted a handheld shower sprayer; I grew up with one and always missed it - plus, it's excellent for Lemon bathing :)
SO! We found a super cool Moen shower head at Sam's of all places (go in for bulk chicken breasts and salmon, leave with a shower head, natch)
The other big-ish purchase is this awesome hold-everything stand we got at Bed Bath & Beyond.  It's a Simple Human (makers of $4000 trash cans) so I assume it's up to snuff - it got great ratings and is supposed to be rust-proof and quite sturdy. So far so good!
Some asides: no bathroom (or room in this house apparently) is without its quirks, including this one.  Behold the demon light!
It's really probably just a room heater that we'll super appreciate in the winter, and there is a timer involved, so it's also probably more high tech than I even realize haha. I just think it's funny that our WC is the red light district.
Also, I am super duper extra skeeved out by bare feet in showers/any tile floor that is unfamiliar to me. Like it's my weird thing. So yeah, I'm still rocking the flip flops, college style, in my own shower. Shh.
So that's a little tour of our new(ish) and improved(ish) WC! Since only one of them slides on the track we are hoping to get new shower doors soon (shocker: they are not standard sized doors) and possibly a new toilet as well (since we assume cracks in the tank that have been superglued are not optimal...)- Mike's obviously saving up for one of these probably in gold. Go big or go home, right?!
Posted by KLM at 6:22 AM No comments:

KLM
New homeowner trying to keep track of all the big changes as they happen!